Usually your second flight lesson with teach you straight and level flight.

In VFR flight, straight and level flight should only be accomplished with reference to the horizon.

The Four Forces in flight

The four forces acting on an aircraft are:

Weight
Acts straight down through the centre of gravity.

Thrust
Is provided by the engine through the propellor.

Drag
Is the resistance to motion experienced by all bodies within the atmosphere.

Lift acts through its centre of pressure and is slightly behind the centre of gravity, where weight acts (small moment arm), creating a nose-down pitching couple. 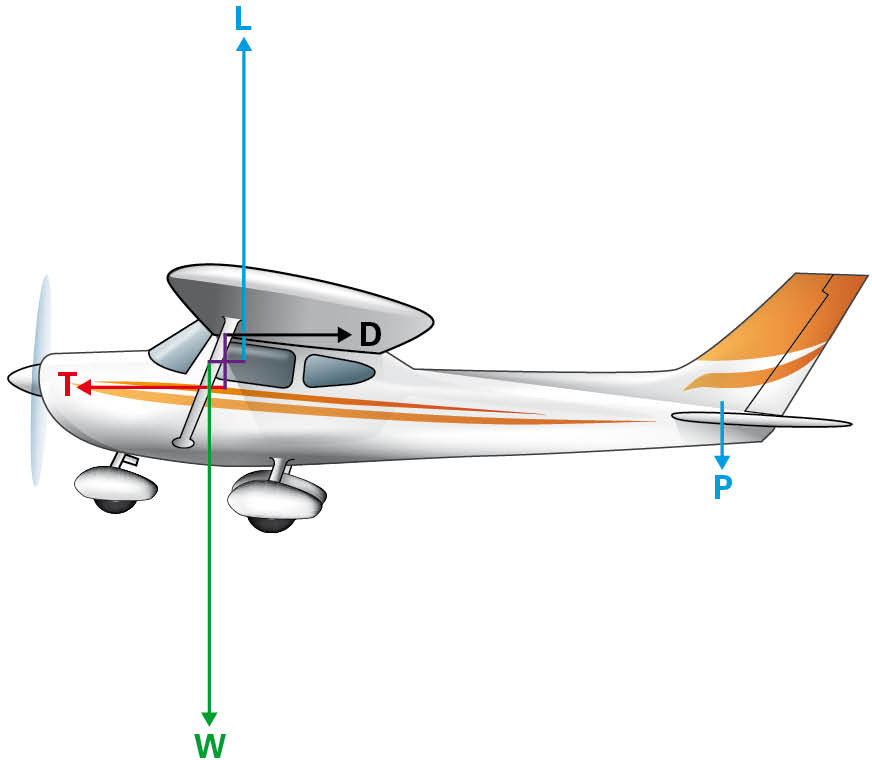 The ideal arrangement is for the thrust line to be well below the drag line. This provides a large moment arm to compensate for the smaller forces of thrust and drag, and creates a nose-up couple that balances the nose-down couple of lift and weight.

In practice, getting the thrust and drag lines separated far enough to balance the lift/weight couple is not possible. Thus, the tailplane is set at an angle of attack that will provide a down force on the tailplane in level flight, which combined with the large moment arm, balances the forces.

Any further imbalance between the couples, as a result of weight or airspeed change (for example), are compensated for by the elevator.

The lift formula is:

CL is the co-efficient of lift (angle of attack)

ρ (rho) is the density of the air

V is the airspeed, and

S is the surface area of the wing.

The two things that the pilot can easily control are airspeed and angle of attack, so for the pilot;

Angle of attack (α) is the angle between the relative airflow and the chordline of the aeroplane’s wing.

The most efficient angle of attack is approximately 4 degrees, but as there is no angle-of-attack indicator fitted to light ircraft, the airspeed is used as a guide to the aircraft’s angle of attack.

Power is set by reference to rpm – in the example below we have used 2100 rpm.

The attitude will depend on the aircraft type, in this example we will use three fingers below the horizon.

In this case the performance we want is a constant altitude, direction and airspeed – straight and level.

Identify the horizon, and what attitude is required relative to the horizon, with the appropriate power setting, to establish and maintain straight and level flight.

With the use of the ‘windscreen view’ show the attitude in the correct position as well as in the too low and too high positions.

Establishing straight and level flight is achieved by using the mnemonic PAT.

Attitude
The attitude for straight and level is made up of three elements.

Elevator Set the nose attitude – for level (eg, three fingers)
Aileron Wings are level relative to the horizon – for straight

Rudder In balance – for straight
If a constant direction is not being maintained on the reference point (and the DI should confirm this) either the wings are not level, or the aeroplane is out of balance, or both.

Balance is confirmed with the balance ball indicator. The method used to achieve balance is ‘stand on the ball’. If the ball is out to the left, increased pressure on the left rudder pedal is required. This is a pressure increase, more than a movement and ‘stand’ implies continued pressure. Once the ball has been centred, reducing pressure will allow it to move out again.

Trim
Take the time to teach this thoroughly, make sure the student relieves all of the control pressures so that their hands can come off the controls and the aeroplane remains level.

Maintaining straight and level is achieved by using the mnemonic LAI.

L – Lookout
In a scan look ahead, look out to the left and scan 20 degrees for 3 seconds from left to right, passing over the nose of the aeroplane.

A – Attitude
Ensure the attitude is correct relative to the horizon and is also constant.

I – Instruments
Used to confirm accurate flight. Scan from From right to left.

It should be emphasised that every time power or airspeed is changed, a change in rudder pressure is necessary to maintain balance. Therefore, during those phases of flight where power or airspeed are changing, rudder will need to be applied to maintain balance. In addition, when rudder is being used to centre the ball, the wings must be held laterally level with aileron.