In your third flight lesson you will usually learn how about climbing and descending an aircraft.

As they say, everything that goes up must come down so you will need to have a good understanding of both

In a climb the aim is to maintain a constant speed and direction and to do so the aircraft must be in equilibrium. In this lesson the relationships between the four forces in the climb are used to show that the aircraft remains in a state of equilibrium when it is climbing.

There is a common misconception that in the climb the lift is increased, since if lift must equal weight in level flight. Whilst it may appear logical that lift should be increased to climb, this is not the case.

The most important idea that you need to understand is that in order for an aeroplane to climb, thrust must be equal to drag plus the rearward component of weight (T = D + RCW). The rate at which the aeroplane will climb, depends on how much more power is available. If there is lots of additional power available this will result in a high rate of climb.

Forces Acting on the Aeroplane in a Climb 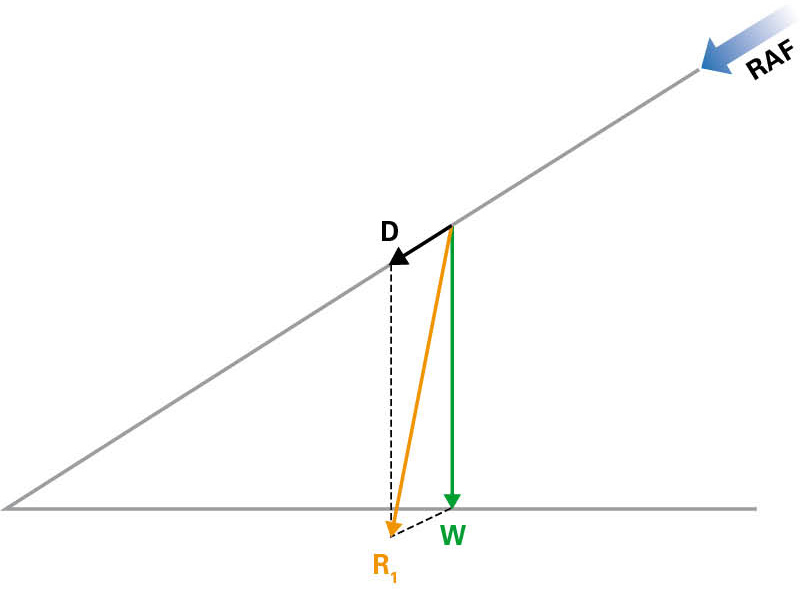 If we draw a line from the central point, equal and opposite to R1 we can see the point R2. We can then Resolve R2 into its two components of lift and thrust. 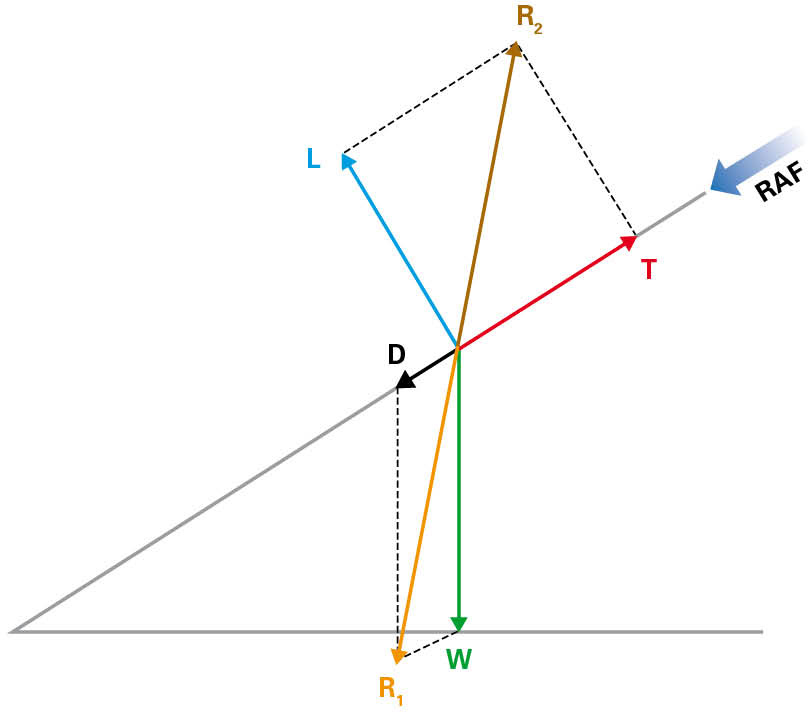 In a climb, thrust must increase to equal drag plus the rearward component of weight (T = D + RCW).

From the diagram, in a steady climb, “thrust is greater than drag.”

Why then, does the aeroplane not accelerate?

To answer this question we can break weight (W) down into its two components, with the rearward component of weight (RCW) added to the drag vector.

Thrust is equal to the drag plus the RCW . 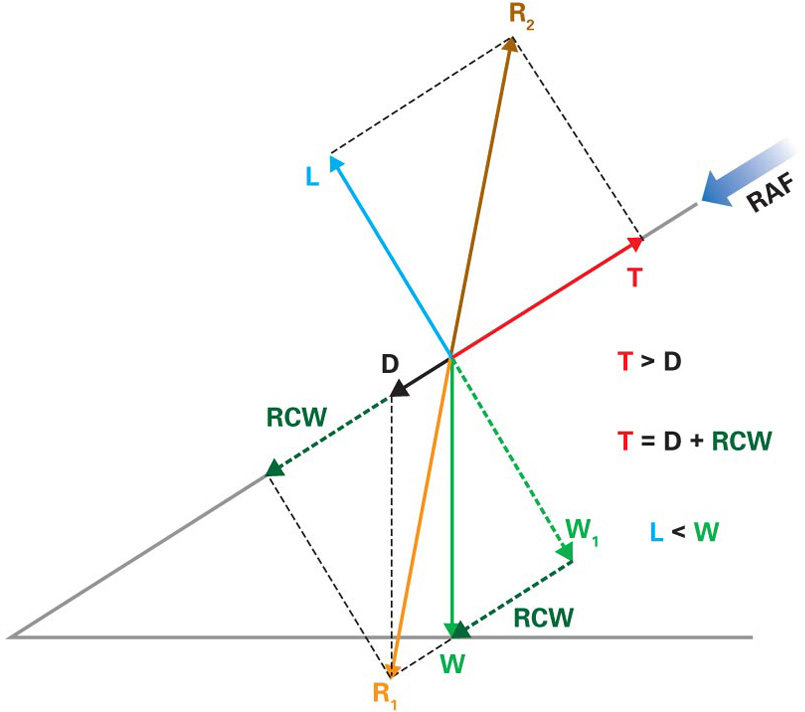 The factors affecting climb performance are:

Power
The more power available, the better the climb performance.

Altitude
Engine performance (power) decreases with altitude, therefore there will be a limit to how high the aircraft can climb.

Weight
The greater the weight, the greater will be the RCW (rearward component of weight). Therefore, weight reduces the rate of climb and the angle.

Flap
Increases lift and drag and alters the Lift/Drag ratio. Since drag opposes thrust, any increase in drag will reduce the rate and angle of climb.

Wind
Affects only the climb angle and the distance travelled over the ground (the range) to reach a specific altitude.

Equilibrium is required for a steady descent. If, whilst in level flight, the power is removed there will be no force balancing the drag. Therefore in order to maintain the flying speed the nose must be lowered.

With the nose lowered and weight still acting down towards the centre of the earth, there is now a forward component of weight (FCW) that balances drag. Remember that for equilibrium there must be a force equal and opposite to weight. This force R is made up of lift and drag. Therefore, the aeroplane is in equilibrium. 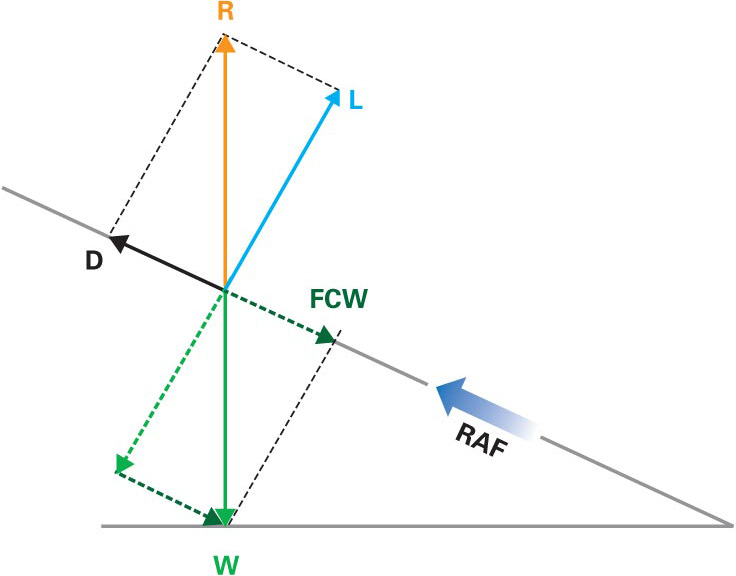 The relative airflow is now coming up the slope to meet the aircraft and therefore the angle of attack is still approximately 4 degrees.

Power
Power controls the rate of descent (RoD) The more power used, the less the RoD. Power also reduces the descent angle and increases the distance travelled over the ground, increasing the range from a given altitude.

Lift/Drag ratio
The ratio of lift to drag is a measure of the efficiency of the wing, for example, the higher the lift to drag ratio the further the aeroplane will glide (its range). The L/D ratio determines the steepness of the glide, or descent angle.

If you then change this ratio by increasing the drag (by extending flap or flying at an incorrect airspeed) a greater forward component of weight is required to balance the drag thereby steepening the flight path.

Weight
A change in weight does not affect the descent angle. With an aeroplane flying at its best L/D ratio, an increase in weight will increase the FCW, increasing the speed down the slope, and therefore the rate of descent, but not the angle of descent. 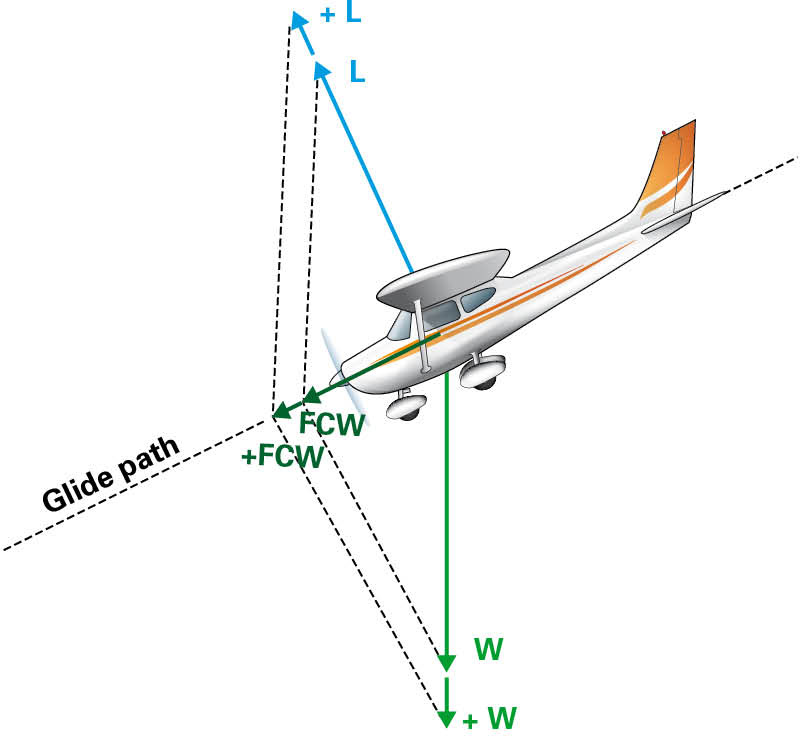 Flap
The increased drag produced by the flap requires an increased FCW to maintain equilibrium and thereby steepens the descent, increases the RoD, and reduces the range.

Wind
Affects only the descent angle and the range from a given altitude.

The air exercise will concentrate on improving the coordination skills learnt in the previous lessons, by entering and maintaining the climb and descent, while maintaining the aeroplane in balance, and regaining straight and level.

Entry to the climb will be taught as PAT and the concept that climb performance depends on power will be reinforced. Since increasing power smoothly (stop the resulting yaw with rudder) will cause the nose to pitch up, power and attitude should be considered a coordinated movement, and no engine over-speed should occur.

AAttitude
With elevator, select and hold the attitude for the nominated climb, maintaining wings level with aileron and balance with rudder.

TTrim
Remove excessive loads by trimming back. Once performance has been confirmed, trim accurately to maintain a constant attitude.

If the correct climb attitude is selected the airspeed will be as specified by the aircraft operations manual . If both the attitude and the power setting are correct, the resulting performance is a steady rate of climb of 500/700 ft/min in most trainers. If the wings are held level and balance maintained, the aeroplane cannot turn. Therefore, the objective of entering and maintaining the climb has been achieved.

If the airspeed is not correct then the attitude is incorrect, and performance will be affected. Your instructor will emphasise that the airspeed is altered by reference to attitude, and that due to inertia once a change has been made, a smaller change in the opposite direction will be required, to hold the new attitude. These corrections are commonly stated as “change – check – hold – trim”.

To regain straight and level from a climb, the mnemonic APT is used.

AAttitude
Anticipate the required altitude by approximately 10 percent of the rate of climb, ie, a climb of 500 feet per minute will require an anticipation of 50 feet.

With the elevator, select and hold the level attitude. The airspeed will increase only gradually, because the aeroplane must overcome inertia. To assist this process, climb power is maintained until a suitable airspeed has been achieved. As the airspeed increases the aeroplane’s nose will want to pitch up, requiring subtly increasing forward pressure on the control column to maintain the correct attitude. The wings should be kept level in relation to the horizon, and rudder adjusted to keep straight on the reference point.

PPower
Through knots, decrease power to rpm. The resultant pitch change and yaw must be compensated for, remember to use smooth throttle movements.

TTrim
Accurate trim cannot be achieved until equilibrium has been established. However, obvious control loads may be reduced immediately, then followed by accurate trimming.

Once the instruments confirm level flight is being maintained, the aeroplane can be accurately trimmed to maintain the selected attitude and reference point.

Discuss the nose attitude position in relation to the horizon for the descent.

Entry to the descent is taught as PAT. Power + Attitude = Performance

AAttitude
With the power reduction the nose will want to pitch down, with elevator, hold the level attitude until the nominated descent airspeed is almost reached (allowing for inertia), and then select and hold the attitude for the nominated descent. Maintain wings level with aileron and balance with rudder.

TTrim
Remove excessive load by trimming (usually backwards) and once the performance is achieved, trim accurately to maintain a constant attitude.

With the correct descent attitude selected the airspeed will be knots exactly. If the attitude is correct, and the power is set correctly, the resulting performance is a steady rate of descent of ft/min (approx 500). If the wings are held level and balance maintained, the aeroplane cannot turn. Therefore the objective of entering and maintaining the descent has been achieved.

Maintaining the descent incorporates the LAI scan, with those instruments pertinent to the descent being scanned most frequently for accurate flight.

If the airspeed is not correct then the attitude is incorrect. Emphasise that the airspeed is altered by reference to attitude and that, due to inertia, once a change has been made a smaller change in the opposite direction will be required to hold the new attitude. “Change – check – hold – trim.”

To regain straight and level from the descent the mnemonic PAT is used. Because of inertia, power leads the sequence to arrest the descent.

PPower
Anticipate the required altitude by approximately 10 percent of the rate of descent, ie, a descent of 500 feet per minute will require an anticipation of 50 feet.

The power change will cause the nose to yaw, if not corrected with rudder, and to pitch up. The pitch-up tendency encourages a coordinated movement because the next step is:

AAttitude
With the elevator, select and hold the level attitude. Maintain wings level with aileron, and balance with rudder.

TTrim
Remove obvious loads, and when straight and level has been confirmed through LAI, trim accurately to hold the correct attitude.